THSBA STATE CHAMPIONSHIP QUALIFIERS
CONGRATUALTIONS to the teams that qualified for the THSBA State Championship!

Good luck at Texoma next month!
THSBA Regional Tournament - Lewisville 4/17/21
Well, as always, Lewisville was rough!  The fishing was tough on this cold and windy day for our anglers.  This Regional THSBA Tournament had 293 teams form the North Texas, Metroplex and West Divisions fishing with the top 116 teams qualifying for the THSBA State Tournament at Lake Texoma on May 15th and 16th.  Keller 14 teams fishing with 3 teams weighing fish and qualifying for the State Tournament!!

Next up is the Division Regionals Tournament on Lake Lewisville on 4/17/21.  Keller Bass Team had 14 team qualify (finished in the top 50% in the West Division) to fish.

It was a cold morning, but gorgeous afternoon Saturday at Ray Roberts.  Tough day of fishing for most teams after super cold winter weather we had just weeks prior.  There were 183 teams fishing this THSBA tournament and overall only 65 teams weighed fish.  Keller had 22 teams fishing and 5 teams brought in fish to weigh. Those that caught fish found some big'uns!  The team of Hunt & O'Neill brought in 10.54 giving them a spot in the top 10 for the day.  Great job!
Team stats for Ray Roberts:

See y'all at Granbury!

​Another fun Saturday for our team Lake Whitney!  There were 200 teams fishing in this THSBA West Division Tournament. Keller had 21 teams fishing and 12 teams brought in fish to weigh. The team of Koeninger & Reber brought in 12.89 giving them a spot in the top 5 for the day.  Overall Keller Bass Team came in First Place for the day.  Great job!
Team stats for Whitney:

Another windy Saturday for our team and the whole division on PK!  There were 213 teams fishing with THSBA and a major catfish tournament going on at the same time!  Keller had 21 of the 24 teams fishing 12 teams brought in fish to weigh.  Salvador Macias brought in the BIG BASS for the tournament and walked away with a new pair of Costa sunglasses and plaque for his efforts!  The team of Nix & Shaw brought in 12.38 giving them a spot in the top 10 for the day.  Great job!
Team stats for PK: Congratulations to all our anglers and boat captains fishing and staying safe!  BIG shout out to the Sinclair family for cooking the delicious pulled pork sandwiches for our team and team tent volunteers for another great Keller gathering spot at weigh in.  Now...Whitney here we come!

First tournament of the 2020-2021 season for our KVB anglers.  It was a bit of a windy day for sure and a little slow going.  With a total of 208 teams fishing this tournament, our anglers managed an overall 2nd place finish for the team and the team of Hunt & O'Neill making the top 5!!  Way to go!!
We had 9 teams bring in fish:Congratulations to all our anglers and boat captains for staying safe and finishing the day!  Another thank you to our parent volunteers that set up tent, food, and drinks for our anglers to have a common place to meet and swap stories!! 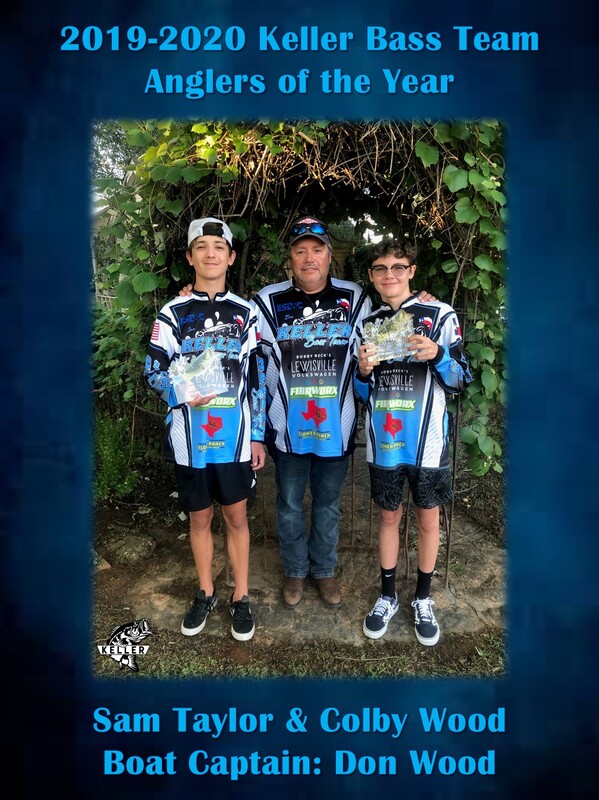 Congratulations to the team of Taylor and Wood who finished in the top 10 for THSBA Angler of the Year!
GREAT JOB KELLER VARSITY BASS!
Keller Bass Team at Lake Whitney - 3/7/2020

KVB had their best outing yet on a strange weather day at Lake Whitney catching 74.67 lbs!  This is where it really counted, catapulting 10 of our teams into regionals.  Thompson finished 12th, Healy 17th, Taylor & Wood 31st, and Summers 33rd place overall.  It was a good day!!! 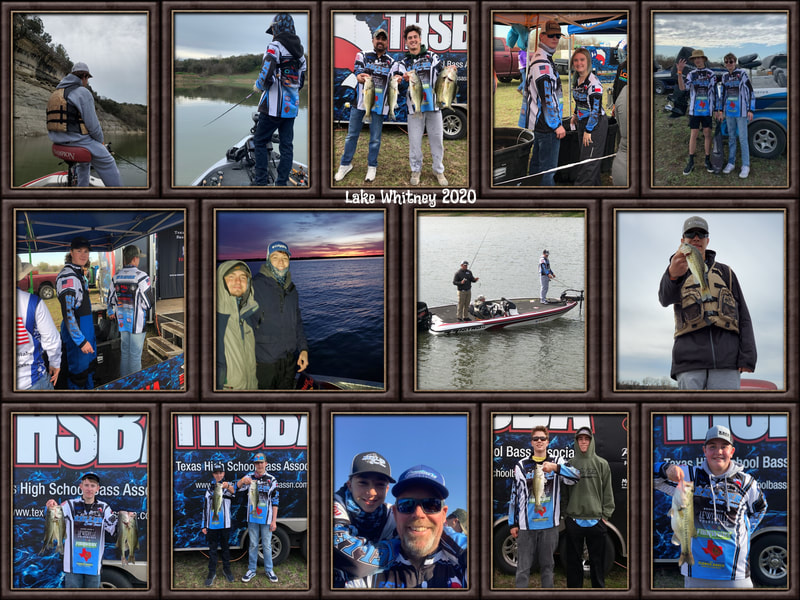 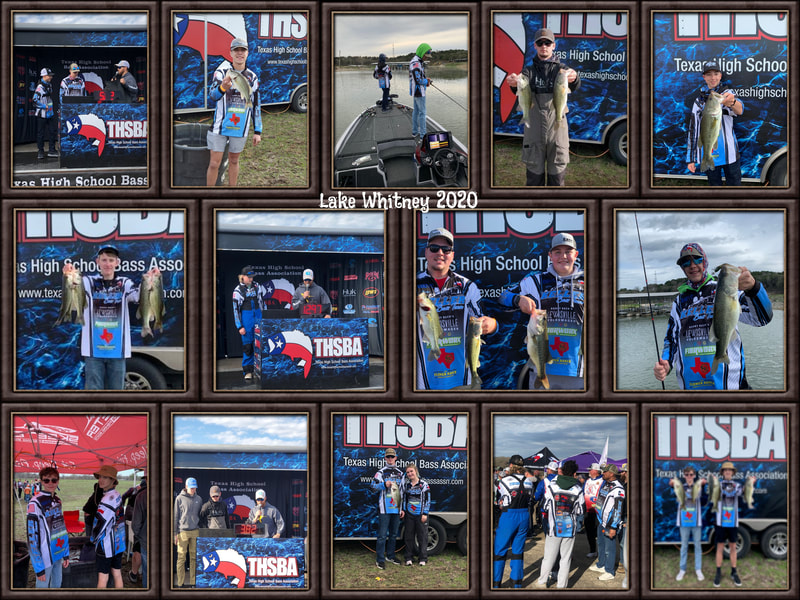 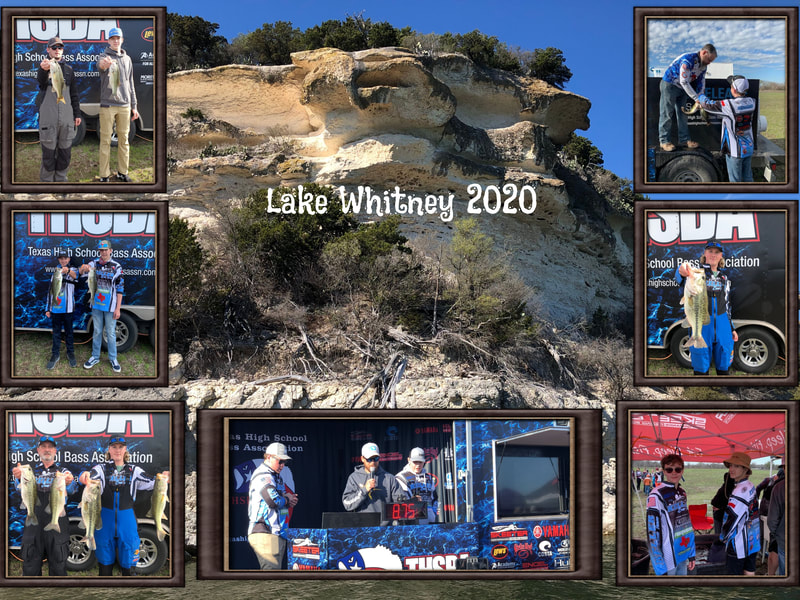 It was a cold, windy, and rough day at Texoma this year.  Finished the day in 3rd overall with 9.82lbs.  Canfield & Summers finished 11th, Hixon & Neal 15th, and Fox & McElwee in 30th place overall. Proud of our group as they hung in till the end and then came in for a warm bowl of chili and some stories! 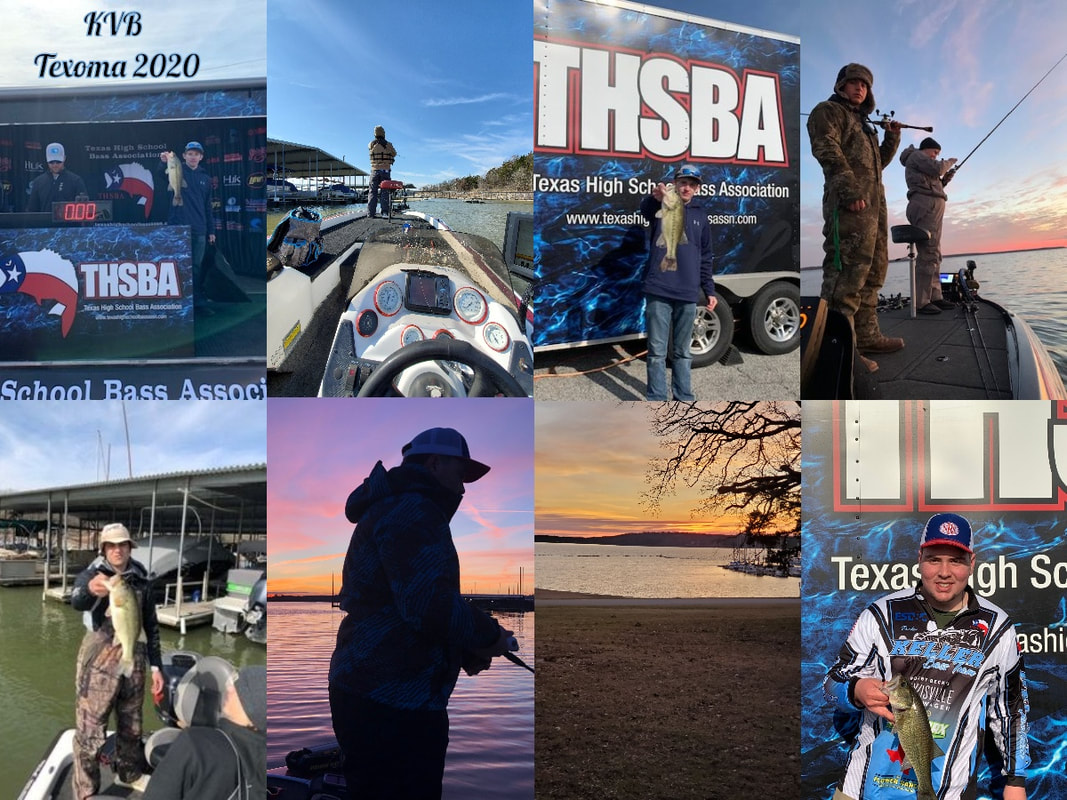 Keller Bass Team at Lewisville - 10/26/19
Keller Bass had their best outing yet of the season at Lewisville.  We had more teams weigh in and finished the tournament 2nd overall with a total of 27 fish for 62.29 lbs.  The team of  Blakeman and Healy led the charge with 5 fish totaling 12.86 lbs finishing 7th overall! Way to go!! 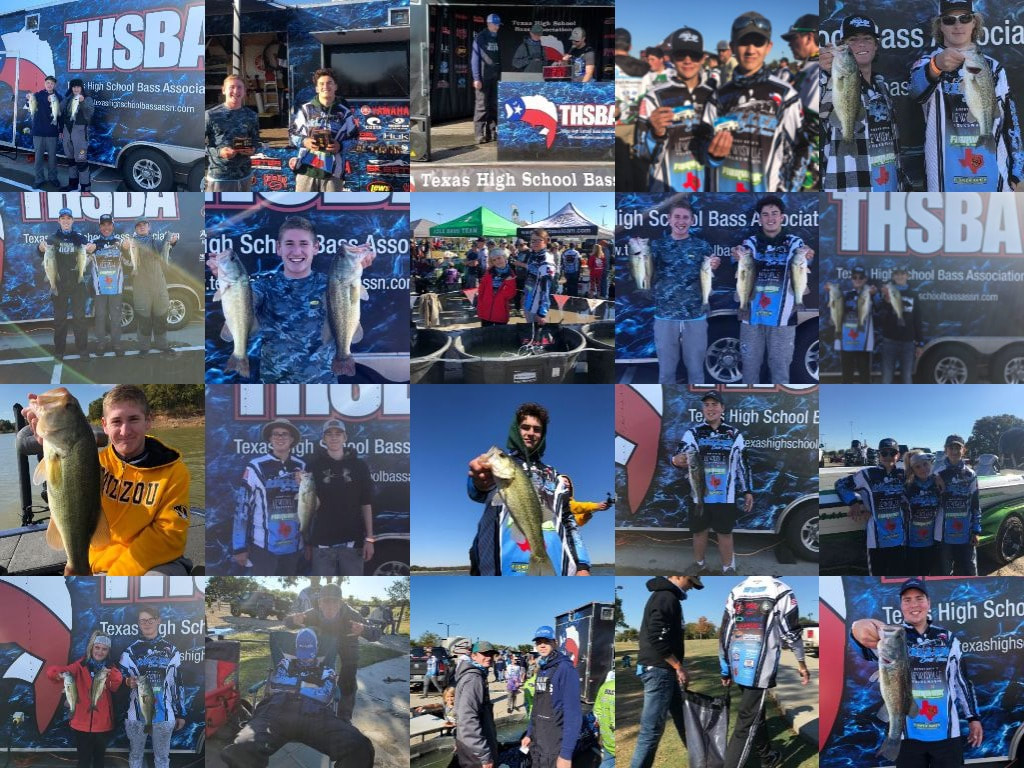 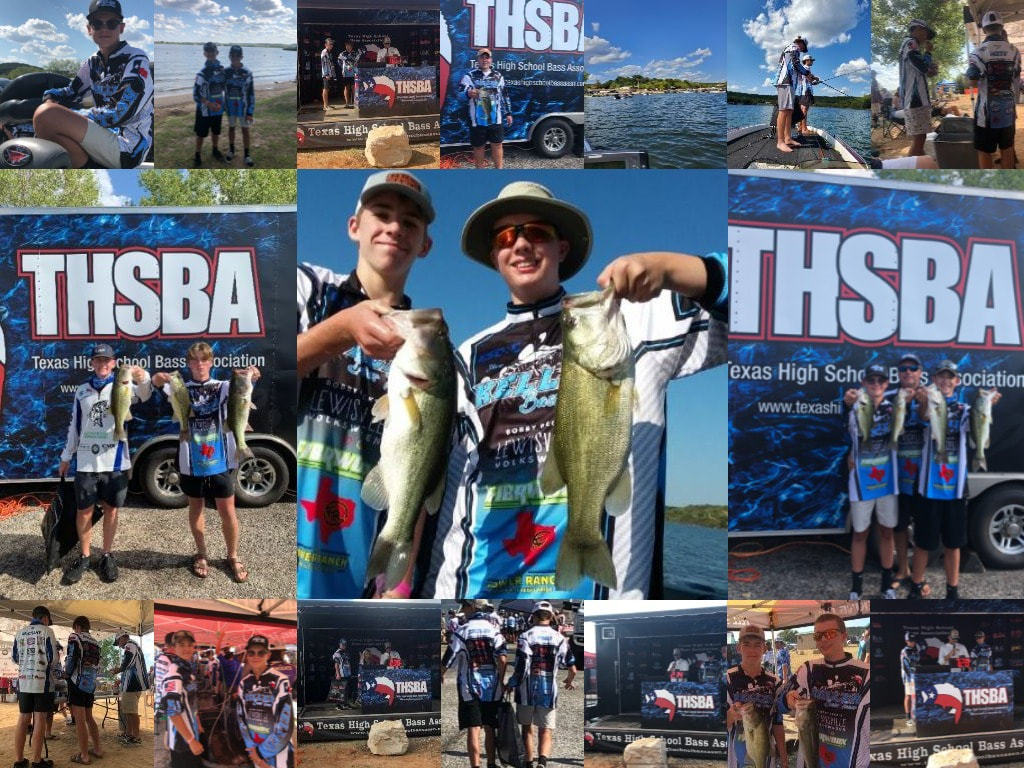 Keller Bass Team at Ray Roberts - 9/14/19
We had five teams weigh in with the team of Taylor and Woods finishing in the top ten overall AND bringing in the big bass of the tournament at 7.60 lbs!
WAY TO GO! 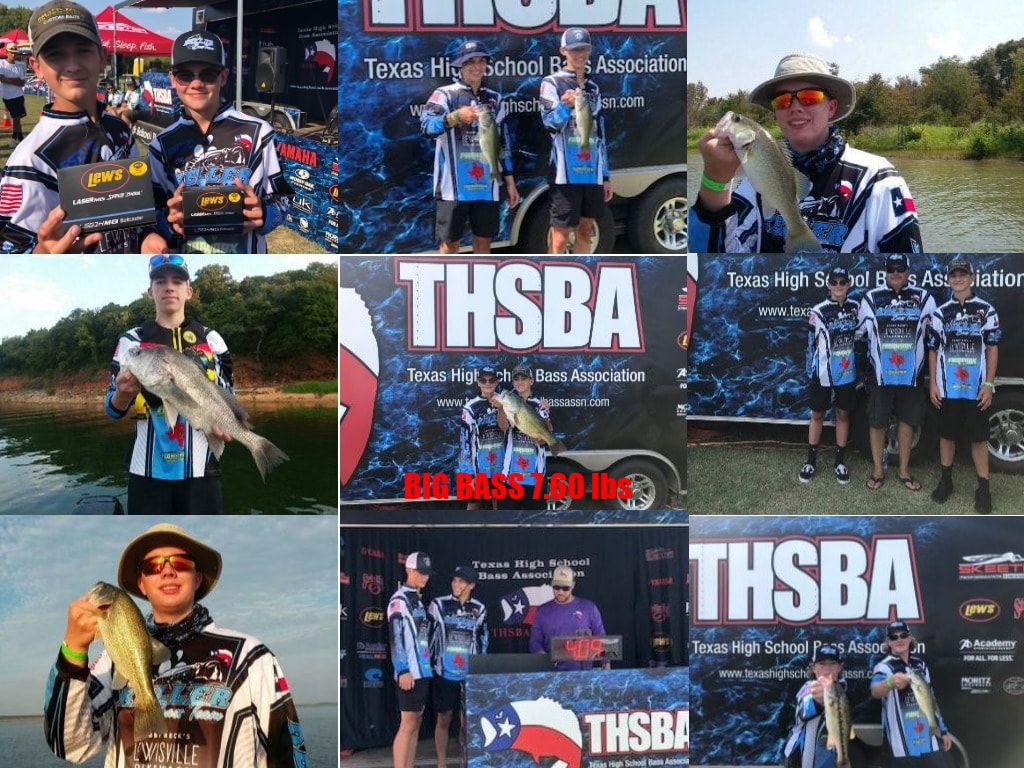 Keller Sending 6 Teams to State Championship
​Congratulations to our qualifiers for the state championship on Cedar Creek!

Keller Finishes Strong - Headed to Regionals
Congratulations to all our teams going to regionals, several of which were in the top 25 for AOY!

Here are our teams that finished in the top 20 on Whitney.

The Keller team took home the trophy again! We have won every single tournament so far, something that is a first for the Texas High School Bass Association! 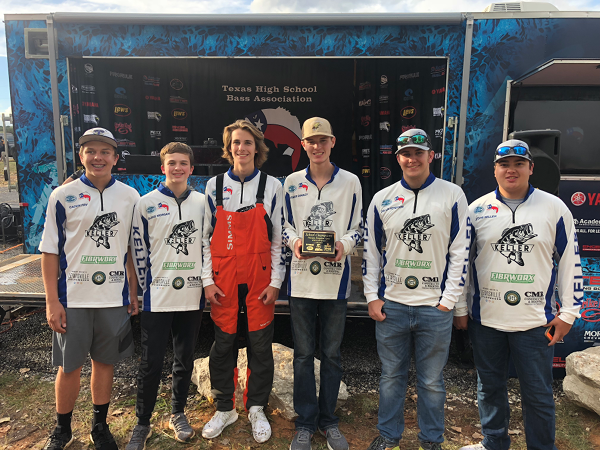 ​Here's how our individual teams placed out of 221 teams.